After leaving Washington at the end of his term. James and Sarah traveled south to New Orleans and traveled up the Mississippi River into Tennessee. After paying a visit to the president’s mother in Columbia, they ventured to their newly renovated home in downtown Nashville. James’ diary makes frequent mention of cholera during their travels. Outbreaks occurred throughout the country that summer including in New Orleans and Nashville.

In one of the President’s final diary entries he wrote:

Friday, 1st June, 1849. - Mr. V. K. Stevenson & Gen’l Harding, who were taken ill of cholera on yesterday, are both better this morning. I was occupied during most of the day among my papers & books at my own house. During the prevalence of cholera I deem it prudent to remain as much as possible at my own house.

The President would succumb to the disease two weeks later, just three months after leaving office. His is the shortest retirement of any Commander in Chief. 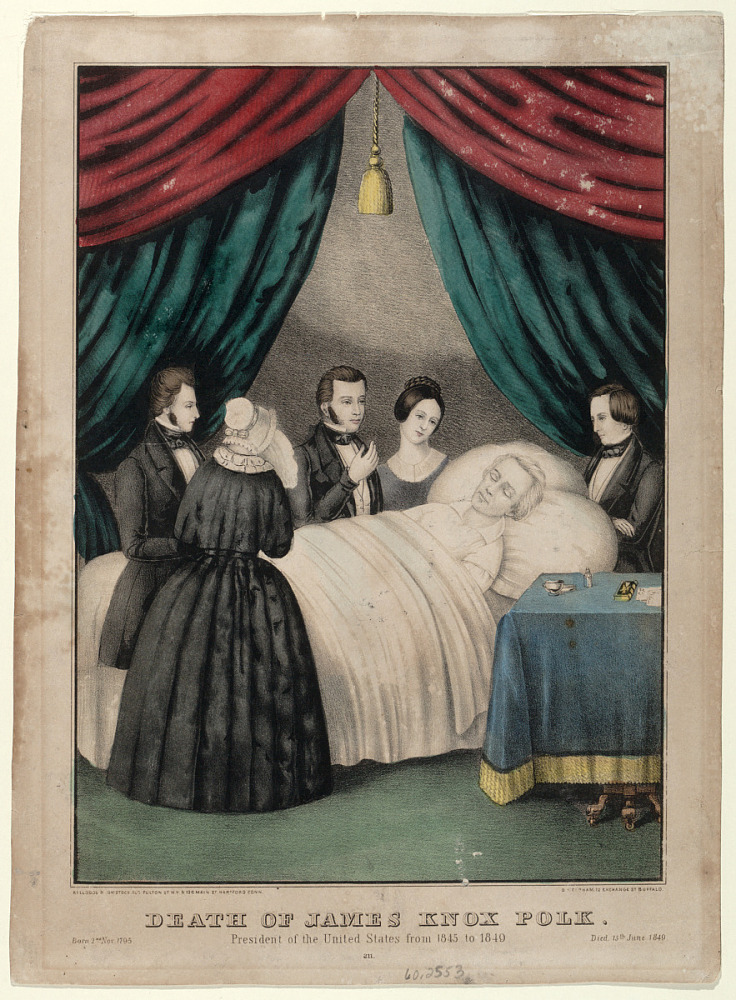 Death from cholera was a terrible ordeal. Bouts of uncontrollable vomiting and diarrhea deprived the body of fluids leading to death from dehydration. President Polk’s death in 1849 should have been preventable, but the accepted medical treatments for cholera did more harm than good. Doctor’s prescribed laxatives, bled patients with leeches, and applied other methods that further dehydrated patients.

The disease spread through contaminated drinking water caused by unsanitary practices in cities and towns. Though the cause of the disease was not understood in 1849, precautions were taken by towns and cities at the onset of an outbreak. Streets were cleaned, houses scrubbed with lime, and schools and businesses shuttered. Victims were buried hastily, sometimes in mass graves in an effort to reduce the spread. President Polk was initially buried in the Nashville City Cemetery within 24 hours of his death in an area specified for victims of Cholera. He would later be reinterred at his home after the outbreak had subsided.

President Polk’s death is a grim reminder of our own realities during the current COVID-19 pandemic. We are encouraged to take precautions and “remain as much as possible” in our own homes. Even as the country looks at “reopening,” the numbers of confirmed cases, hospitalizations, and deaths climb across the United States.